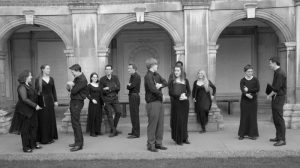 Founded in 2010 by Louisa Denby, Vox Cantab is a flexible chamber choir consisting (mainly!) of current and former choral scholars of the University of Cambridge; members are drawn from all over the UK and abroad. Vox Cantab have performed all over the British Isles, including several cathedral residencies and visits, and high-profile concerts conducted by their patron Jonathan Willcocks. The Choir made its first trip abroad, to Cork, Ireland, in August 2016, and in August 2019 had a very successful time in Ghent, Belgium.

Much of the Choir’s work is devoted to charity and outreach, and educational visits are a regular fixture of trips and tours. Vox Cantab enjoys a long-standing relationship with many churches and venues in Pembrokeshire, South Wales, where they regularly sing concerts and services in St Davids Cathedral and elsewhere, as well as undertaking fundraising and learning & engagement projects in the local area.

Vox Cantab often works with distinguished guest conductors: the Choir was delighted to be invited to perform the Duruflé Requiem with Jonathan Willcocks and professional orchestra Southern Pro Musica in Petersfield in February 2015; in September 2016 a concert of Bach & the Baltics in London, conducted by Sarah Tenant-Flowers, was a highlight of the season, and in March 2017 Vox Cantab performed as part of the special centenary concert for the poet Edward Thomas at the Petersfield Musical Festival.

Vox Cantab is known for innovative programming: in January 2016 their annual visit to the Fitzwilliam Museum in Cambridge consisted of a semi-staged version of John Rutter’s Wind in the Willows, and in March 2016 they gave an exciting theatrical performance of music by Purcell and Handel with The Rosemary Consort Brass Ensemble, also in Cambridge.

2018 was another extremely busy year for Vox Cantab, with an hilarious performance of The History of Music Hall at the Fitzwilliam Museum in Cambridge in January, followed by a concert of music by Purcell and Handel in Petersfield in February, again working with Jonathan Willcocks and Southern Pro Musica. After a series of cathedral visits in the summer the choir made their first commercial CD recording in August, and over the new year made another trip to Pembrokeshire, singing services in St Davids Cathedral and a special family concert in the village of Trefin.

As well as a huge number of services and private engagements, 2019 saw another performance at St Mark’s, Cambridge, with Sarah Tenant-Flowers and Victoria’s Requiem by candlelight. Music by Victoria also featured in the choir’s tour and September programmes, which consisted of music in honour of the Blessed Virgin Mary, by 16th-century European composers.

2020 was Vox Cantab’s tenth anniversary, but the COVID-19 pandemic thwarted our planned celebrations. We have been very pleased to be singing together again in recent months.

If you would like to purchase Vox Cantab’s latest CD, please email louisa@voxcantab.net.