In August 2016 we ventured abroad for the first time, to sing a concert and two services at St Fin Barre’s Cathedral in Cork, Ireland.

The concert on the Saturday, based loosely around the theme of ‘prayer,’ featured works by Renaissance composers from England, including Byrd’s Be unto me, O Lord, a tower and Tomkins’ Arise, O Lord, and Europe (Palestrina’s Exultate Deo and Lobo’s Versa est in luctum were particular highlights), as well as a selection of more modern pieces with organ accompaniment, of which Andrew Millington’s joyful setting of Psalm 150 went down especially well with the large audience. Following a short break and rehearsal for the following day’s services, we hit the town (!), spending an enjoyable and slightly surreal evening sampling the local nightlife.

The following day we returned to the Cathedral to sing for the morning Eucharist – Palestrina’s Missa sine nomine – after which we were plied with coffee and biscuits (so many versions of custard creams!) by members of the congregation, before a delicious lunch at the nearby Flying Enterprise.

Evensong consisted of Howells in E, and the Rose responses for men’s voices, followed by Wood’s haunting View me, Lord, rounded off by a fabulous rendition of the Toccata from Duruflé’s Suite V, played by the equally fabulous David Warren. 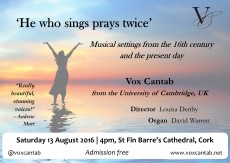