@VoxCantab We hugely enjoyed your singing- look forward to hearing more from you. What a talented bunch!

In April 2015 Vox Cantab returned to St Michael and All Angels, Chalton for a concert of one-to-a-part seasonal music by composers from 16th-century Europe.

The same concert was given at St Peter-on-the-Green, Froxfield, and the Choir also sang Byrd’s Five-part Mass at a Eucharist service at All Saints’, Steep, on the Sunday morning.

We had a lovely daffodil-filled weekend, and are grateful to everyone who made donations to our 2015 Summer Outreach Project.

Morley – April is in my mistress’ face
Morley – Now is the month of maying
Farmer – Fair nymphs, I heard one telling

The title of this concert, given by Southern Pro Musica and Vox Cantab, was The French Connection. The large audience were treated to wonderful music by Fauré, Duruflé, Poulenc and Rameau. Vox Cantab, founded in 2010 by Louisa Denby, is a highly accomplished group of current and former choral scholars from Cambridge University. They immediately showed their outstanding musicianship in Poulenc’s four unaccompanied motets for the time of penitence. The settings are homophonic with many finely articulated moods. There are sharply defined dynamic contrasts, phrase by phrase, with bloc-like shifts, which are the hallmarks of Poulenc’s style. The singing had eloquence and the intensity of the music was idiomatic. Duruflé’s four motets on plainsong themes for unaccompanied voices show an astonishing conciseness. They were all sung with love, warmth and precision….wonderful!

Richard Pearce was the exemplary soloist in Poulenc’s exciting organ concerto. The single movement work displays Poulenc’s ability to effect an abrupt change of mood, from high spirits to melancholy, seamlessly. The many contrasting sections, which differ in style, tone and texture were superbly registered by Richard Pearce. This was an exhilarating reading of great fluency and authority and beautifully supported by the strings and timpani of the orchestra.

The main work of the evening was Duruflé’s Requiem. Written in 1947, the layout is based on Fauré’s masterpiece. The work is based on themes from Gregorian chant, but Duruflé skilfully integrates the plainsong with a romantic approach. The chamber version of strings, harp and trumpets was used tonight with great effect. There was a good balance between the sudden outbursts of agitation and the work’s mysticism and warmth. The choir sang ardently throughout with moments of great tenderness – as in the Agnus Dei with the flowing accompaniment of harp and strings – and the passionate outbursts in the blistering Sanctus with its dramatic trumpet calls. The solos were sung with deep feeling and imagination. The Pie Jesu was plaintively sung by the ravishing soprano, Catherine White, and the dark, rich bass of Richard Latham was a joy. This was a deeply expressive, sensitive performance from the excellent choir and orchestra, directed with love and passion by Jonathan Willcocks.

The concert opened with music by one of the great French Baroque composers, Rameau. Southern Pro Musica played movements form his opera-ballet, Les Indes Galant. This attractive work is full of dance numbers which are tuneful, dramatic and imaginative. The playing was light and rhythmic, but I wish the timpanist had used hard sticks to give the performance a little more bite.

Thank you to everyone for an evening of outstanding music making.

@VoxCantab Thank you for a beautiful and tuneful service. Please come again!

‘A first-class choir that could have performed in a professional venue anywhere in the country.’
Anne Cleaver, de Mellow & Co

‘Last Sunday’s Vox Cantab Promenade Concert at the Fitzwilliam was a triumph!’

“The choir from Cambridge University proceeded to fill this ancient church with angelic and enchanting music. The effect was just breathtaking.  The audience at Chalton Church were privileged to experience a first-class choir that could have performed in a professional venue anywhere in the country.  It was a very special evening that made a deep impression.”
Anne Cleaver (original article) 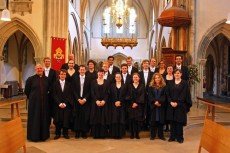 Walford Davies – Blessed are the pure in heart

Bairstow – Lord, I call upon thee

A small number of us visited the Rowans’ Hospice, Waterlooville, and Steep House Nursing Home, in order to entertain the residents with a varied selection of music.

We also visited our 94-year-old friend in his home, where we were treated to a sumptuous tea and a glimpse of a ‘Great Bible,’ dating from the 16th Century.